Today marks the release of isomorphic-git version 1.0! 🎉 There are a lot of big improvements to celebrate.

No longer must we maintain the index.d.ts file by hand! Thanks to improvements in TS 3.7, we can auto-generate the declaration file using tsc --declaration --allowJs. This has the added benefit that the JSDoc is also included in the index.d.ts which leads to a much richer IDE integration. Sadly, parameter descriptions still aren't shown, but the main description body and the example code are!

Here's what the Visual Studio Code tooltip for git.log looked like before: 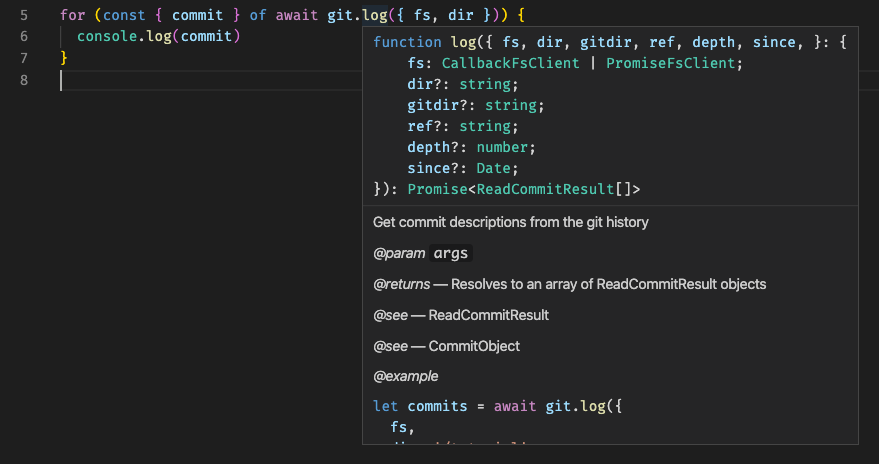 The functions themselves have been tweaked so that the core object interfaces (CommitObject, TreeEntry, TagObject, etc) are reused wherever possible, so that all the functions feel consistant and there are no surprises. The result is a cleaner API where the documentation comes to you, right where you are.

The return types gel with TS better now. For example, readObject returns a "discriminated union" type, so you can take advantage of powerful type inference, like this:

Exceptions are also well-typed now, so you can access their .data property with confidence: 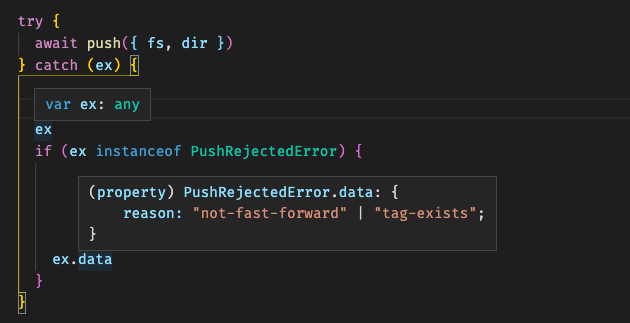 A number of helpful behaviors that had to be opt-in before to preserve backwards compatibility are now the defaults.

:shudder: You live, you learn, amirite?

A number of "helpful" default behaviors have been removed, because no default is better than a bad default:

Another one was automatically appending .git to the end of URLs when you clone them. That can be helpful, but it can also completely break cloning for some servers, which led to the awkward addition of the noGitSuffix parameter (cringe). In version 1.0, the URL you give is the URL we GET.

Something I tried to do early-ish in the development of 0.x was to move towards this idea that all function arguments need to be serializable. My reasoning was this:

This led to the creation of magic-portal and publishing the WebWorker Guide. It also was the main constraint driving the design of the plugin system. The idea was all the callbacks could be setup in one place.

However, since that time I have grown a tad wiser. In building real-world applications with isomorphic-git, I've realized:

Therefore the plugin system and its awkward global state and funky namespace "cores" are gone, replaced by a vastly simpler collection of callback arguments. The new code is safer, has better locality when you're reading it, and enables some cool new behaviors like canceling running functions and infinite retry for interactive authentication.

A number of other changes, such as returning Uint8Array instead of Buffer, were done to pave the way for future refactoring. The size of the library can be shrunk significantly if we drop the Buffer polyfill dependency. Plus, Webpack 5 reportedly won't provide node polyfills automatically.

As always, all the functions are async and take named arguments, which makes adding new features without breaking old ones easy! I'm a huge fan of this pattern, and I think it's been very successful.

It is safe to say that the API for isomorphic-git will remain backwards compatible and have no breaking changes for at least a year, possibly two or three. Because I want you to always be able to upgrade to the latest and greatest version of isomorphic-git without having to change any of your code.

Except for today. Today, we are making breaking changes because it is a major release.

A HUGE THANK YOU to everyone who used isomorphic-git 0.x. You've been tremendously helpful, and you early adopters have helped make this project of mine fun and fulfilling!

And an even bigger thanks to everyone who contributed directly! Seeing other people help improve the codebase has warmed my heart. And seeing your bug reports at least lets me know it is getting lots of use!

Lastly, I'd like to thank Stoplight, Inc for hiring me and letting me work on isomorphic-git occasionally as part of my regular day job! Everyone has benefitted from the bugfixes, perf, and usability enhancements that have resulted from our using isomorphic-git in our world-class API designer, Stoplight Studio.

Some functions have been renamed or removed:

Some function parameters have been removed or replaced:

The return types of some functions have changed:

Some function behaviors have changed